Earlier this week we had the opportunity to present our in-progress studio work/finished Project 1 work to a small jury of in-house faculty. The conversation focused heavily on the process of production, investigation, and iteration. Over the first roughly two weeks of studio we worked to curate and abstract a series of organic structures or images that were then transposed into three dimensional digital and physical model. The overall process landed somewhere between step-by-step and back-and-forth where each portion or method was presented sequentially, but with the hope that you would constantly reflect upon and refine earlier progress, and that those refinements would then be made evident in continued iterative design phases of the physical and digital models.

The site we were assigned is out of reach physically for our studio which in a way makes it the ideal place for a hypothetical project – you can not be lured to it for overly detailed and unnecessary site analysis. We are totally reliant on stock images, Google Earth, and the minimal GIS data we could pull in a short period. In a way, even the site remains abstract and hypothetical. As the designer you are free to frame the characteristics, attitude, and personality of the place (within reasonable means). At over 11,000 acres the San Diego National Wildlife Refuge (SDNWR) has no shortage of opportunities for interpretation, concept exploration, and site potential, all fostered by its varying topography, water and land resources, and diverse biological communities. The online description of the site frames an image of dynamic biological systems in the heart of one of the driest locations in the country:

“In spring, wildflowers bloom amidst the sage and chamise covered slopes and canyons of San Miguel and McGinty Mountains. The refuge supports open grasslands and cool river corridors. Towering oak woodlands, a habitat type being restored on the refuge, offer shade for visitors walking the trails.”

The site also has a proximity to the United States-Mexico border that is a unique feature from the perspective of a studio based in the heart of Tennessee where international borders aren’t generally a concern. The potential of this political boundary, so wrapped up in social debate, became a focus of my project as the work progressed. What if the site’s proximity to the border could be utilized in some way that was subtly cloaked in political intentions? Could a fog catcher in the middle of nowhere act as a catalyst for social conversation? If so, how does it spark that conversation in a way that is democratic to all participants, and generally constructive?

I began investigating ways that the structure could relate to both the site and regional contexts of the SDNWR. How does it fit into the topographic features and ecozones of the SDNWR? How can it relate itself to its sister structure less than 8 miles away? The idea of countering the border with another wall began to play out. Playing off of current political conversations surrounding immigration and border security, I began to develop a counterpoint parallel (figuratively, not literally) wall to the proposed border wall extension. How could we re-frame a  border wall as a social constructive and non-divisive object? 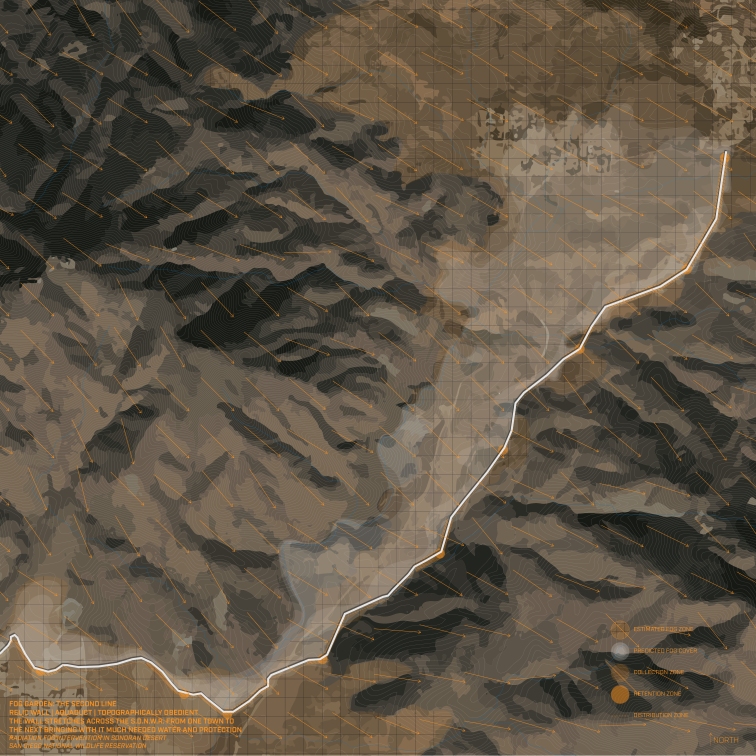 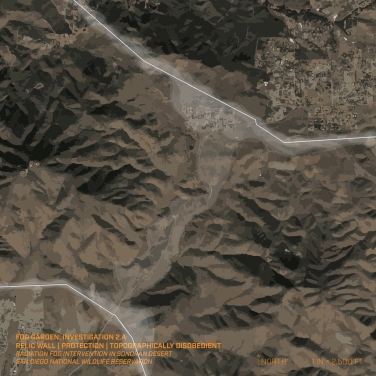 THE STRUCTURE is impending stretching for miles across the Sonoran Desert, just outside San Diego. A winding, writhing shape that twists its way across the valley near Provost Drive. Its form works its way across the ground following the general path of the site topography to create a screen at a consistent elevation across the site. From above the structure appears monumental stretching on into the distance for several miles. Yet the frame is narrow at only 3 feet deep and 16 feel tall. Composed of aggregate components it has an almost skeletal appearance resembling a worn out beast nothing more than skin and bone. Upon first encounter one’s immediate reaction is likely something of disbelief and discomfort. Why is it there? How can it be standing? Its staggering frame is clad in tensile meshes and screens made of various materials giving the appearance of worn. dry, tattered skin stretched taught across a frame. The dew and fog drip form the textured facade surfaces and make their way into the collection system, the structure’s passive circulatory network linking every point along its many-mile-long body. You can’t help but feel that you have encountered some ancient, long-since extinct organism strewn out across the arid landscape. This thing shouldn’t be, and yet it is. And it provides for so much more around it. 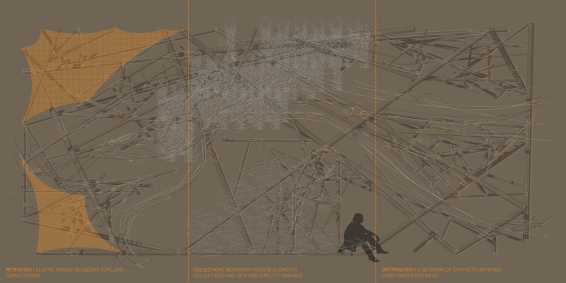 THE SECOND LINE | ORGANIC ARCHITECTURE WITH A SOCIAL MESSAGE

THE STORY of Second Line evolved somewhat late in the game after we were presented with the final portion of our studio prompt. For this first portion of the course we have been tasked with turning our organic structural systems into pieces of architecture capable of collecting, harvesting, and distributing fog in some way or for some intention. The challenge is fairly open-ended and difficult to approach due to its somewhat hypothetical stance – fog catchers as key architectural structures. It is not to say that fog catchers are not a viable or real-world architectural system as there are systems currently being developed by researchers to harvest fog and humidity in climates where surface water is scarce. These systems, however, typically look like nothing more than screens of mesh suspended between metal or wooden poles. They do not approach the notion of spectacle or really carry any aesthetic quality with them as they are completely utilitarian in their intent. Second line attempts to create a visual or experiential spectacle of fog harvesting in a way that is also a social spectacle.

Tying together the notions of fog catching, spectacle formation, and social imperative, Second Line scores a course through the SDNWR. South of this line is a new No Man’s Land between the SDNWR and the Mexican Border. Those fleeing north to promise must cross nearly 8 miles of this unrelenting terrain. Upon reaching the Second Line they are met by a shambled frame of timbers, metal tubes, the material seems less important in this moment. The facade provides much-needed water for the weary refugees. The aggregate frame is porous with opportunities of respite, shelter, and cover from danger. On the other side a dense blanket of fog envelopes the northern terrain. This extra moisture has encouraged the growth of dense vegetation and new stands of oak forests. It is easy to get lost here, both from your fears and your realities. In this way the San Diego national Wildlife Refuge becomes a refuge for even the people who may be visiting it, even it only out of circumstance and necessity. From above the structure appears monumental stretching on into the distance for several miles. Yet the frame is narrow at only 3 feet deep and 16 feel tall. Composed of aggregate components.

REFLECTIONS ON THE REVIEW | MOVING FORWARD

A couple of things jumped out at me from the presentation of this material and the other student presentations from the review: